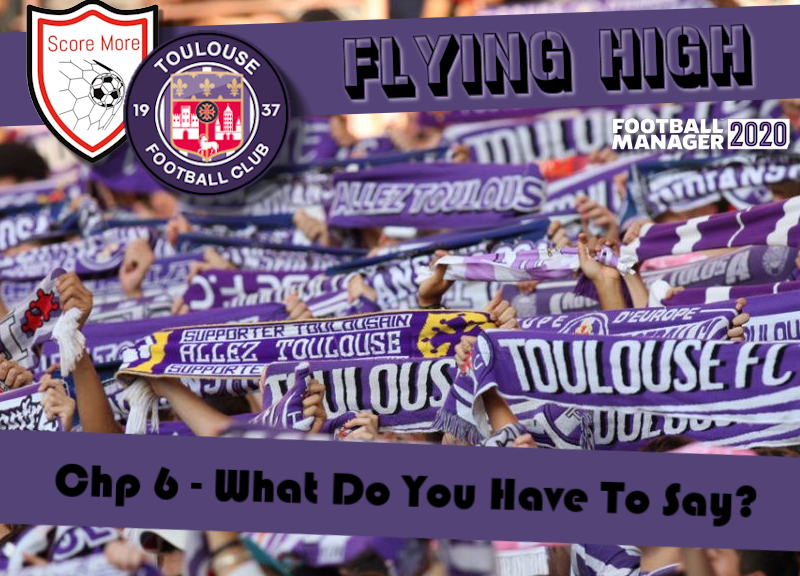 At the end of pre-season, ScoreMore is interviewed for local sports magazine Believe To Win about the team´s pre-season and his aspirations for the future. Read the full transcript of the interview below.

Previously: A poor start in the pre-season friendlies led ScoreMore to take the decision of going for an instant, rather than gradual, change in tactics. The old wide formation and key player and captain Max Gradel were dumped for the new narrow formation.

This is Gabriel B. Urpani and I am interviewing Matisse ScoreMore. He is the first Maltese man to manage a top-tier team in one of the most reputable leagues. This has undoubtedly created a stir back home. What about him, though? Will he do the same in France this year?

GBU: Matisse, thank you for finding the time to meet me. Today is the 15th August, feast of the Assumption. A national holiday in Malta, as it is here. It surely is not a holiday for you though, is it?

SM: Thank you Gabriel for joining me here today. It is not a holiday for us, no. To tell you the truth it is not as busy as it was until a couple of days ago, though. Pre-season for us is over and we feel ready for the new season. It is “just” work on the training grounds now as we are quite happy with where we are.

GBU: Does that imply that transfer dealings are over?

SM: You can never say never in football, but as things stand I am happy with the team at my disposal so things will probably remain as they are, yes. Until a week ago or two ago, we had a big question mark regarding a particular element of our midfield. That has now been cleared up, and we should have an official announcement for you in a day or two.

GBU: I am assuming that with the amount of midfielders at your disposal, it concerns a player leaving, not joining. Is it linked to Manu Koné, the young attacking midfielder you promoted from the reserve squad?

SM: Yes, it will not be him who is leaving though. In line with our policy, I have decided to stick with him and give him a chance this year. Our change from a system with wingers to a narrower formation, together with Koné´s skills and performances in the pre-season friendlies left me with 3 players vying for 1 spot. One of the other 2 (both more comfortable playing on the wings), will be leaving to join a Belgian club on loan in the coming days.

GBU: Can you talk to us about the transfers you have made so far? What was your thinking? Some have dubbed you arrogant and wanting to undo what your predecessors have done.

SM: I wouldn´t agree with that arrogant part. (smiles) But, yes, it is true, I had to change some things. With the change to the narrow formation, it was obvious that despite being captain, Gradel had to leave. That change also meant that the forward line had to be supported through other means.

I saw 2 ways of doing that. First, I was looking for a striker who is able to drop deep and provide a link between the midfield and his striking partner. We found that in young Jonas Wind, signed from Kobenhavn. I was also looking for a midfield playmaker…

GBU: Then why did you send loanee Vainqueur back home? That is one of the main reasons behind your “arrogant” tag.

SM: See? I´m not really arrogant. I didn´t leave the room when you stopped me right there. (Smiles) Honestly though, the fact that Vainqueur was on loan was one of the reasons why I wanted to replace him. With the sales of Gradel, Sanogo and Leya Iseka we had some money to spend and I wanted to use that to improve the team while reducing our reliance on loans. Looking towards the future, it is one thing I want to change.

Anyway, looking at vision and technical skills, I am sure that you will agree that Dátolo is an improvement despite his age. He is also good at set-pieces, something I felt was lacking at the club. Because this signing was relatively cheap, I could also bring in another veteran in Tim Sparv. He is strong mentally and physically and will be the guard dog of our defence. He will also be a leader in the dressing room as well as on the pitch, something that I also felt was needed.

Another addition was Armougom from Caen at left back. He is decent and still young, so I think that he will compete with Sylla for the left back position. We have two capable players there. At over €3m, I wished he was cheaper, but considering that we will have only one player on each flank, his pace and decent skills on both sides of the pitch will be needed.

GBU: Following your bad start to the pre-season, you had a change in fortunes which many attribute to the change in tactics. We are now in one of the most exciting weeks for fans: the week between the last friendly and the start of the new season.

The calendar gave you a tricky start, with two important matches right at the start. A penny for your thoughts.

SM: First of all, yes. I would agree that the change from a wide to a narrower system, coupled with the new faces mentioned, made a difference.

Regarding the calendar: on the contrary. Going to Dijon before hosting Strasbourg on the second day is a good start for us, in my opinion. These are 2 of the teams we could beat on a good day, so we have the possibility of starting the season on a high. If we manage to get a good result here, we would start the season on a good note, and it would help morale. Playing against similar teams is always a must-win for teams like us, so I´d rather meet them now, in the state we´re currently in, than after a tough set of fixtures.

GBU: Let´s hope for your sake that that optimism does not come back to haunt you. Let´s move on, how do you feel about the season in general?

SM: I am really excited to be honest. Many tip us for a tough season ahead. But it will be tough for everyone. Playing to our strengths, trying to neutralise those of our opponents, and attacking their weaknesses to avoid relegation, excites the tactician in me.

GBU: You seem to agree that you are in for a tough battle to avoid relegation.

SM: Honestly, I think that with the team we have, we can avoid the battle itself with a good start to the season. What I am here for is a season where we can consolidate our place in Ligue 1. We could then use this foundation to build a team capable of slowly climbing up the ladder.

GBU: Matisse, all the best for the season ahead. I can assure you that our fellow countrymen back in Malta will be rooting for you, an underdog at the helm of underdogs.

Stay tuned to see what the start of the new season will bring for ScoreMore and his Toulouse F.C. as they aim to avoid relegation.

The first chapter of my adventure with Toulouse F.C. on Football Manager 20 can be found here.

This site uses Akismet to reduce spam. Learn how your comment data is processed.

Enjoy Football Manager.. This is what it´s all about